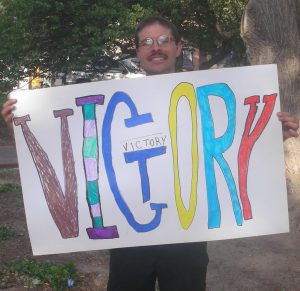 After months of strategizing and organizing, the tireless work of countless Chainbreaker members finally paid off.  On June 12, 2013 our City Council voted unanimously to support our HELP SANTA FEANS RIDE campaign.  Help Santa Feans Ride will help people who struggle with transportation costs by distributing free annual bus passes to people who get a bike through the Bicycle Resource Center or buy one at a local store.

In addition to creating a program that is the first of its kind in the country, the campaign also effectively shut down efforts to create a “Bike-Share” program – a taxpayer subsidized bicycle rental program – because it raised serious equity concerns and threatened to leach money away from our already underfunded bus system.

This is an important victory for Chainbreaker members and the community as a whole.

By passing this law, Chainbreaker members were able to highlight transportation as an economic and environmental justice issue, begin conversations about how city planning policies can benefit one group over another – often at the expense of low-income people of color, and create sound public policy that supports the people who bear the brunt of this economy.

The details are still being worked out, but we expect the program to go into effect in August.  We will provide updates as they come.  Join our email list to keep informed about the progress of this campaign and all our work.

This campaign was such a sweeping success because people like you decided to get involved!